Artificial Intelligence
is a Savant

Read this insightful blog by Eric Veldkamp on his website

Last week I attended a theater lecture by the famous Dutch physician and neurobiologist Dick Swaab. Dick Swaab is best known for his research and discoveries in the field of brain anatomy and physiology and the impact that various hormonal and biochemical factors in the womb have on brain development. His book ‘We are our brains – a travel through brains’, describes Dick’s conclusion that brains are not things we have, but rather brains are what we are: the physical and chemical processes in our brains determine how we react and who we are.

The lecture was organized around his new book ‘Our creative brain’. For me, the lecture was especially interesting because of the topic and content, not so much based on Dick’s presentation skills. It departed from the big five personality traits, also known as the five-factor model (FFM) and the OCEAN or CANOE Model. The five factors have been defined as openness to experience, conscientiousness, extraversion, agreeableness and neuroticism. 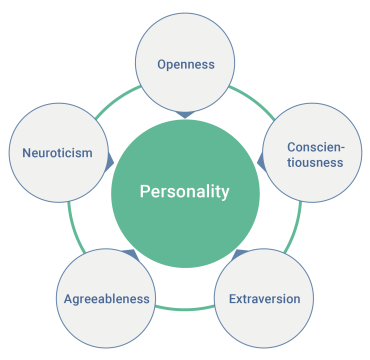 Beneath each proposed global factor, there are several correlated and more specific primary factors. For example, extraversion is said to include such related qualities as gregariousness, assertiveness, excitement seeking, warmth, activity, and positive emotions.

How many triangles do you see? It is an illusory contour, a symmetrical figure consisting of 3 discs each missing a triangular section, and 3 pairs of lines. Looking at the figure, most people will have the visual experience of an apparent brightness contour defining an upright triangle which is occluding three black discs and a second, inverted triangle outlined in black. In fact, these triangles do not exist! If you then consider that memories fade, and people have difficulties in gathering and presenting info from their long-term memory, you can imagine for instance in court cases it is hard to use eye witness stories.

Anyway, I’d like to share some more examples presented by Dick with you as well. Two years ago, in my blog on Argument from Ignorance I wrote about PI Day, March 14 (Yes, it is coming soon again!). Dick talked about the man who memorized PI (a circles circumference divided by its diameter), Daniel Tammet, memorizing 22,514 digits in just over 5 hours! This is an example of synesthesia, a puzzling phenomenon in which a certain type of stimulus triggers a hallucinatory perception. Daniel is an autistic savant and wrote and TED talks about his life with Asperger syndrome and Savant Syndrome.

Savants became known with the filming of Rain Man, a 1988 movie telling the story of an abrasive, selfish young wheeler-dealer Charlie Babbitt (Tom Cruise), who discovers that his estranged father has died and bequeathed all of his multimillion-dollar estate to his other son, Raymond (Dustin Hoffman), of whose existence Charlie was unaware. Raymond is an autistic savant. Savants like Rain Man have very low mental performance in most areas. However, they also have unusually high performance at a very small number of things.

Read more of this insightful blog by Eric Veldkamp.

We use cookies to ensure that we give you the best experience on our website. If you continue to use this site we will assume that you are happy with it.Ok